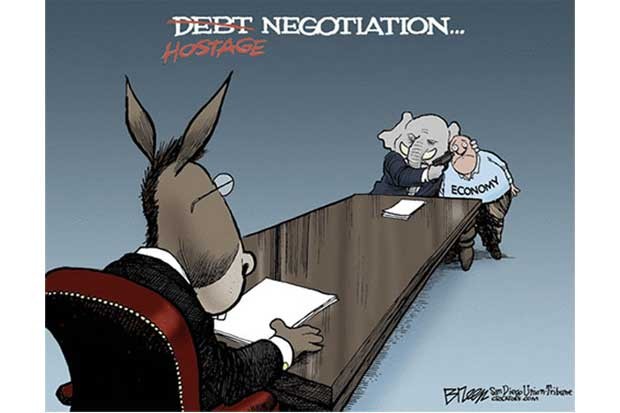 END_OF_DOCUMENT_TOKEN_TO_BE_REPLACED

“The notion that “half of Americans don’t pay taxes” not only overstates the share of households that do not pay federal income taxes in a typical year. It also ignores the other taxes people pay, including federal payroll taxes and state and local taxes. Policymakers, pundits, and others sometimes overlook this point.”

END_OF_DOCUMENT_TOKEN_TO_BE_REPLACED

The Romney/Ryan ticket represents a return to the disastrous past; not only a return to the failed policies of the Bush years, but also a return to the militarism and inequality that characterize the Reagan years. A Romney/Ryan administration would be far more extreme in its approach to propping up the rich at the expense of the middle-class and low income families.

END_OF_DOCUMENT_TOKEN_TO_BE_REPLACED

Ayn Rand argues for a radical libertarian approach to markets and government. This is a dangerous approach because we have been there before. We have had a world with no labor laws, no food regulations, no labor protection, limited public safety, no social security, etc. This is a horrific world where feudalism rules, and where the common man has no voice or power. This is the land of limited freedom and opportunity. And this is where Ayn Rand and today’s Republicans want to return. I suggest, that instead of going backward, let’s go Forward.

END_OF_DOCUMENT_TOKEN_TO_BE_REPLACED

Few political activists have had a bigger impact on the direction of public opinion than Grover Nordquist. Over the past 30 years, he has successfully shifted public opinion—at least conservative perspectives—on two major topics. First, tax cuts. He has made tax cuts the sole conservative solution to the economy in whatever condition it may be in. If the economy is good, we need tax cuts; if the economy is bad, we need tax cuts. He joins others radical conservatives, such as Arthur Laffer, in promoting the idea that tax cut increase government revenue. Nordquist has famously convinced the majority of congress to sign his tax pledge not to raise taxes, which has made it very difficult to manage the deficit, especially during a tough economy.

END_OF_DOCUMENT_TOKEN_TO_BE_REPLACED

The American philosopher, John Rawls, addressed this dilemma in an innovative way. He thought of a hypothetical situation that would help guide our ethical principles of fairness. He described a situation where all of us would be in a pre-mortal state, behind a “veil of ignorance,” where we none of us would know what circumstances we would be born into. We could just as easily be born into a wealthy family as we could be born into the slums. With these assumptions, what principles would we all agree are fair principles upon which to build a society?

END_OF_DOCUMENT_TOKEN_TO_BE_REPLACED

There is a reason that the rich don’t suffer in a recession; that middle-class wages have been stagnant for 30 year; that the majority of the nation’s wealth is in the hand of the top 1%. Conservative tax policy has dominated for 30 years. And in this Great Recession, with profits way up, there is not need to hire more people. And in this context, with a skyrocketing national debt, with millions out of work, the Republicans can still talk endlessly of how tax cuts are the answer to creating jobs. No. Tax cuts are the answer to enriching the already-wealthy.

END_OF_DOCUMENT_TOKEN_TO_BE_REPLACED

The Dow Jones industrial average increased by 29.5% in the one-year period following Barack Obama’s inauguration on Jan. 20, 2009—the third best showing, going back 110 years, for the U.S. stock market in the 12 months following the inauguration of a new President. Franklin Delano Roosevelt’s first year, which began on March 4, 1933, tops the list with the Dow increasing by 96.5% over the next 12 months. Meanwhile, Jimmy Carter trails his peers with a loss of 19.6%. On average, Presidents in the Democrat party saw an average one-year gain of 24%, while Republicans averaged 1%.

END_OF_DOCUMENT_TOKEN_TO_BE_REPLACED

The America I know is generous and compassionate; a land of opportunity and optimism. We take responsibility for ourselves and each other; for the country we want and the future we share. We are the nation that built a railroad across a continent and brought light to communities shrouded in darkness. We sent a generation to college on the GI bill and saved millions of seniors from poverty with Social Security and Medicare. We have led the world in scientific research and technological breakthroughs that have transformed millions of lives.

END_OF_DOCUMENT_TOKEN_TO_BE_REPLACED

We now have over half a million military personnel serving on more than 737 military bases all over the world. These bases are on more than 130 countries. According to the late military scholar, Chalmers Johnson, these bases facilitate the “policing” of the globe and are meant to ensure that no other nation, friendly or hostile, can ever challenge us militarily. He predicts that military spending will “sooner or later…threaten our nation with bankruptcy.” Many would argue that a strong military is necessary because it is a deterrent to potential adversaries. Really? Then explain to me why our tax-payer-funded military bases include a ski center, over 200 military golf courses, dozens of luxury jets, and many luxury hotels. Conservatives like to compare government (public) workers (such as military personnel and Wisconsin teachers) with private workers, insisting, for instance, that Wisconsin teacher, police, and firefighters’ pensions and wages are too generous compared to what private workers are paid (to justify why unions should be crushed). So I am sure they will not want to make the argument that military personnel should have private golf courses and other superfluous luxuries that those in the private sector do not enjoy.