In his recent speech on the Senate floor,  Senator Bernie Sanders passionately declared, “There is a war going on…a war being waged by some of the wealthiest and most powerful people in this country, against the working families of the United States of America, against the disappearing and shrinking middle class of our country” (see his video speech below). There are a number of data points that indicate the truth of Senator Sanders claim. Let’s look at a few of these:

We need to think about what is causing these trends and how they can be countered. We know they are not countered by extended income tax cuts for the wealthy or raising the estate tax exemption amount. Republicans seem to be doing everything in their power to speed up these trends; and taking the House this year will give them some power to continue the status quo. It it worth think about what kind of country we end up with if they have their way. It is not pretty for anyone, not even the rich. These trends need to be reversed if we are going to preserve our way of life. 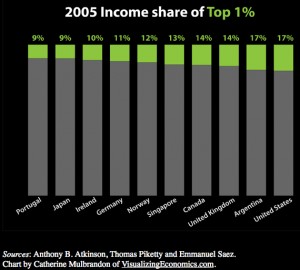 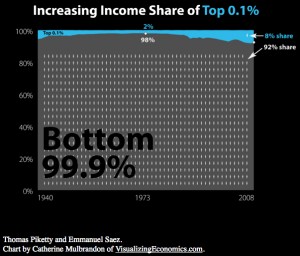 The tax debate is getting heated. Obama has made a deal with Republicans to extend the Bush tax cuts for two years in return for an extension of unemployment insurance benefits.

See his response to the questions of reporters. “By the mid-1950s, the most union-prone sectors of the American economy had largely been organized, and millions of workers saw improvements in their living standards as a direct result of union activity. Many economists observed that this rise in union fortunes helped non-union workers as well. ‘Collective bargaining has significantly improved the wages and working conditions of unionized and nonunionized workers,’ contended Levitan, Carlson, and Shapiro in Protecting America’s Workers . ‘Other benefits of union representation include increased leisure, better medical coverage, and more secure pensions…. Finally, unions have helped nonunion workers by lobbying for legislation that grants all workers such protections as equal employment, safe and healthy workplaces, and secure pensions.'” (source)